Mr. Kelly worked for over forty years as an attorney in the nonprofit sector, in private law practice, and in the corporate sector and has been an active advocate through many education and community organizations and causes in Oregon. Now retired from the practice of law, Mr. Kelly has most recently served as an arbitrator and mediator of business, employment, and public policy disputes. From 1987 to 2005, Mr. Kelly served in several positions at Nike, Inc., including general counsel and global director of public affairs. Prior to his 17 years at Nike, Mr. Kelly had a private law practice in Portland from 1977 to 1987 and served as executive director of the Multnomah County Legal Aid Service from 1973 to 1977.

Mr. Kelly was appointed to the Oregon State Board of Higher Education in September 2007 and reappointed in 2011. He served as president of the board from 2008 to 2011. On the OSBHE, Mr. Kelly served as chair of the Governance & Policy Committee and was the designated member to the Oregon College Savings Plan. He concluded his service on the OSBHE upon his appointment to the initial OSU Board of Trustees. Mr. Kelly currently serves on The Campaign for Equal Justice Advisory Committee. Prior board work and other activities in which Mr. Kelly has been involved include the Legal Aid Services of Oregon and Oregon Law Center boards; the Concordia University Foundation board; the Chalkboard Project’s School Funding and Budget Accountability Group; the Oregon School Funding Defense Foundation; the University of Oregon School of Law Dean’s Council; and the boards of the Oregon Business Association, the Oregon Business Council, and the Portland Business Alliance.

Mr. Kelly received an A.B. in English from the University of Notre Dame and a J.D. from Georgetown University.

He and his wife Lynn have two children. 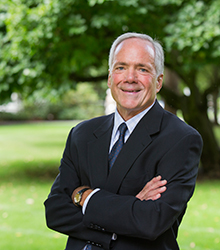