As OSU’s president, Murthy is committed to improving access to college for all learners; advancing student success, undergraduate graduation rates and inclusive excellence throughout the university; expanding OSU’s strong research portfolio by investing in research infrastructure; and supporting faculty excellence in teaching, research and Extension and engagement programs.

Prior to joining Oregon State, Murthy served as the Ronald and Valerie Sugar Dean at the UCLA Henry Samueli School of Engineering and Applied Science since January 2016.

Murthy, 64, was the first woman dean at UCLA’s engineering school. 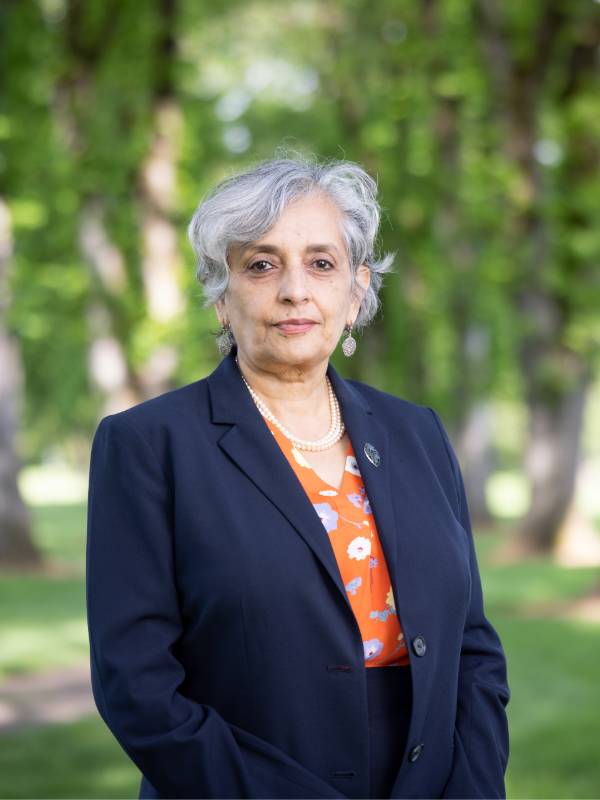 During her tenure, she made expanding access to a UCLA engineering education a top priority by deepening relationships with local community colleges, increasing outreach to underrepresented minority groups and easing the transition for transfer students. She led the effort to establish a Women in Engineering program at UCLA that supports the full participation of women in engineering.

Under Murthy’s leadership at UCLA, the engineering school focused on growth in areas critical to the 21st century, including engineering in medicine and biology; sustainable and resilient urban systems; artificial intelligence, machine learning and data science; cybersecurity and the future internet; robotics and cyberphysical systems; as well as advanced materials and manufacturing. She also has served as a distinguished professor in the school’s mechanical and aerospace department.

While at Purdue and University of Texas, Murthy served as the director of the Center for Prediction of Reliability, Integrity and Survivability of Microsystems (PRISM) from 2008 to 2014, a center of excellence supported by the National Nuclear Security Administration (NNSA).

Murthy began her career at Arizona State University, where she was an assistant professor of mechanical and aerospace engineering from 1984 to 1988. From 1988 to 1998, Murthy worked at New Hampshire-based Fluent, Inc., a developer and vendor of the world’s most widely-used computational fluid dynamics software. She led the development of algorithms and software that still form the core the company’s products.

She has authored over 330 technical publications.

She is a member of the National Academy of Engineering (NAE), foreign fellow of the Indian National Academy of Engineering (INAE), fellow of the American Society of Mechanical Engineers (ASME) and the recipient of many honors, including the ASME Heat Transfer Memorial Award in 2016 and the ASME Electronics and Photonics Packaging Division Clock Award.

Her research interests include nanoscale heat transfer, computational fluid dynamics, and simulations of fluid flow and heat transfer for industrial applications. Recently, her focus is on sub-micron thermal transport, multiscale multi-physics simulations of micro- and nano-electromechanical systems (MEMS and NEMS) and the uncertainty quantifications involved in those systems.

Murthy is married to Sanjay Mathur, an aerospace engineer who works at SparkCognition, a firm specializing in artificial intelligence systems and development.

‹ President up Speeches and Statements ›