Khawater Hussein graduated from McNary High School in Keizer, OR, and is a Mechanical Engineering student minoring in Exercise Physiology at Oregon State University. She is a woman of color in STEM and a social organizer who is quite involved on theOSU campus and actively seeks out opportunities to elevate the voices of students from underrepresented and underserved backgrounds in as many spaces as possible to create a more representative collective voice at OSU and to create opportunities for social, academic, and professional growth for these students.

Since January 2016, she has been working in Dr. Yigit Menguc’s soft robotics lab optimizing soft pressure sensors and fabricating pneumatic actuators. She started her work in Diversity and Cultural Engagement (DCE) at the Ettihad Cultural Center in January 2017 as a volunteer coordinator and moved up to the Leadership Liaison position in September 2017, where she planned and implemented programs to aid in the social, academic, and professional advancement of OSU students from the regions of North Africa, South, Southwest, and Central Asia. Along with performing daily operations such as opening and closing the center, answering phone calls, and providing tours to guests of the space, she provided support for both international and domestic students from the region through community involvement. Starting September 2018, Khawater moved on to work at the Student Fee Committee (SFC) as the Diversity and Cultural Engagement Liaison, working to represent students from underrepresented and underserved backgrounds and provide them a public platform to express their needs as well as helping decide where tuition dollars are going and to act as good stewards of the student dollars.

In the past 3 years, she was involved in OSU’s Biomedical Engineering Society (BMES) student chapter as a general member, the vice president, and the president. In these roles, she lead her team to create opportunities for students from various backgrounds interested in biomedical engineering to learn more about the field and get connected with research, mentorship, leadership opportunities within the club, as well as fellow students in the field, which was especially important because biomedical engineering is a diverse field that does not have currently have it’s own undergraduate major at OSU. She also made connections with the college of business to create another source of funding for BMES and foster relationships between business and STEM students. She also participates in the Muslim Student Organization putting on events that are focused on community building, interfaith dialogue, and fundraising. 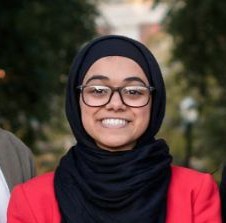