Until her retirement in 2014, Michele Longo Eder practiced law on the Oregon coast for 35 years, with a focus on the representation of families and small businesses, and an emphasis on marine and fisheries law.

In partnership with her husband, Bob Eder, Ms. Eder is a shareholder in Argos, Inc. and are owner-operators of a commercial fishing vessel. Using species-specific "pot" gear, Mr. Eder and his crew catch Dungeness crab and sablefish, a deep-water groundfish. Their vessel also engages in collaborative scientific ocean research with state and federal agencies and universities.

Ms. Eder has published articles regarding the seafood industry, including those related to fisheries management, fishing vessel safety, and ratification of the Law of the Sea Treaty. Ms. Eder published her first book, Salt in Our Blood: The Memoir of a Fisherman’s Wife, in 2008.

In her legal career, Ms Eder organized, in concert with the American Bar Association, a local Volunteer Lawyers Project, which led to the creation of Lincoln County Legal Aid. She also served the as local bar president for several years and was appointed chair of the local professional responsibly committee for three counties.

She is an active member of her community, primarily serving organizations that help families and children. These organizations have included a safe house for victims of domestic violence, a center for emotionally handicapped children, Newport Fishermen’s Wives, the Newport Library Foundation and the Newport Food Pantry.

Ms. Eder earned her bachelor’s degree from Johns Hopkins University in 1976 and her law degree from Lewis & Clark Law School in 1979. 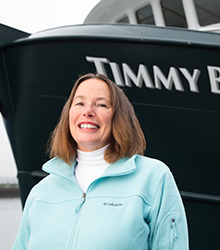