Rani Borkar is a widely respected technology executive and product visionary with 30 years in the computing industry. As Microsoft’s Corporate Vice President of cloud supply chain and provisioning, Ms. Borkar is responsible for accelerating Microsoft’s cloud and edge computing capability and delivering servers and networking to data centers worldwide. Prior to this role, she spent a year at IBM as the Vice President of OpenPOWER Development. Previously, Ms. Borkar worked for 26 years at Intel Corporation, ultimately as an Intel Corporate Vice President where she was instrumental in leading Intel’s silicon product development strategy to fuel the growth of the PC and Data Center business. An engineer at heart, she led large, complex and diverse world-wide engineering organizations that developed world-class microprocessors for Intel Servers, PCs, Phones/Tablets and the Internet of Things.

A progressive and transformative leader, Ms. Borkar leads with the philosophy of “Mission First, People Always.” She fosters an environment of closely-knit global communities that maximize the potential of individuals as well as teams. Ms. Borkar is a respected thought leader and industry speaker who has mentored hundreds of engineers throughout her career. Ms. Borkar was honored with the Corporate Fellow Award in 2004 at the Linkage Women in Leadership Conference.

She holds two Master’s degrees in physics and electrical engineering and completed the Executive Program in Leadership (LEAD) at the Stanford Graduate School of Business.

Ms. Borkar’s deep insights into human dynamics are matched by her deep insights into what it takes to produce great technology. She brings out the best in everyone by encouraging collaboration and creating a safe place for people to be themselves. She has a gift for building highly functional communities that produce remarkable results, while growing the people in those communities. 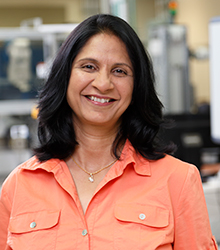